Why the Pix-Star 15-Inch Photo Frame is So Good! 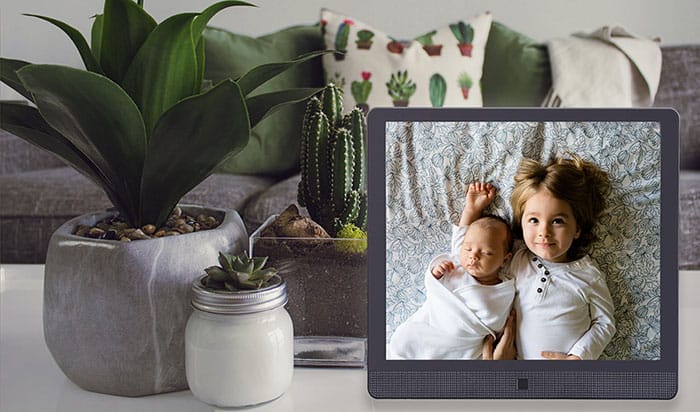 How is the Pix-Star 15-inch photo frame different from its 10-inch frame?

Another difference is the pixel-per-inch count. Pixels-per-inch refers to the number of pixels found in each squared inch of space of the display. It’s calculated by working out the resolution and dividing by the area of the screen in inches. Since both of Pix-Star’s photo frames have the same 1024×768 resolution, the larger screen will naturally have fewer pixels per inch (as the same number of pixels is spread over a larger area).

Again, you won’t notice much of a difference in image and video playback quality – unless you inspect the display up close. The brighter display of the Pix-Star’s 15-inch photo frame helps to make up for the slightly less dense resolution.

The final difference between the two sizes of Pix-Star’s frame is their price. Pix-Star’s 15-inch photo frame is around 30% more expensive than the 10-inch version. If you’re a big fan of large displays that work well in brightly lit rooms, the 15” frame might be right for you. You’ll get a higher screen-to-body ratio and a stunning display that’s also great for showcasing artwork and portraits.

Is the Pix-Star 15-inch digital frame worth the money?

On top of this, the 15-inch frame is packed with the same famous set of features that Pix-Star is known for. You’re getting one of the most versatile and functional digital photo frames, which are quite hard to find for large displays – especially in this price range.

There are a plethora of ways to send photos, videos, and audio to Pix-Star’s 15-inch photo frame. From email and USB/SD cards to smartphone apps and web interfaces, you will always have a way to get media to your frame as quickly as possible. Getting a Wi-Fi digital frame like the Pix-Star is essential if you want to send photos & other media to your frames from anywhere in the world.

Perhaps the best aspect of Pix-Star’s 15-inch photo frame is how easy it is to use. Their frames have been designed specifically with elderly users in mind (and people who aren’t very comfortable with tech devices). You can even control the frames remotely – but more on that below.

Pix-Star’s digital photo frames have one of the broadest sets of features on the market. You can use weather apps, listen to the radio, watch videos up to 2-minutes long, and even link albums from social media accounts and photo-sharing platforms.

Considering the price, and the fact that there are no recurring fees – the Pix-Star 15-inch photo frame has an edge over the rest. Both the Nixplay and the Skylight frames (closest competitors) have recurring fees to unlock additional features or for extra cloud storage.

In summary, while there is no perfect digital frame, Pix-Star’s 15-inch photo frame tick a lot of the right boxes, has great value for money, and versatile functionality well worth the asking price.

Can I control my Pix-Star 15-inch photo frame remotely?

You can control everything you would be able to control in-person. This includes settings, firmware updates, starting slideshows, viewing and syncing web albums, and more.

This feature is especially useful for grandparents and large families that live all over. Once you’ve set up one frame and are familiar with how they work, you can quickly organize the rest of the family’s frames quite easily. You can control up to 20-frames from one user account, which is more than enough for large extended families and their frames.

What is the best way to send photos and videos to my Pix-Star 15-inch photo frame?

The mobile app is still the best way to send pictures and other media to your Pix-Star 15-inch photo frame. The Pix-Star Snap app lets you send multiple pictures to multiple linked frames at the same time. You can record video and audio, take pictures, and even browse and select photos from your gallery – sending them directly from your phone to the app.

They take a couple of minutes at most to show up and can even be set to automatically display as soon as they arrive on your frame.

Aside from the mobile app, another fantastic way to send pictures to your Pix-Star 15-inch photo frame is by linking web albums. This can be done with several social media accounts like Facebook and Instagram, and several photo sharing and online storage platforms like Google Photos and Dropbox.

Once these web albums are linked and synced, they’ll be saved to your frame’s internal storage so that they can be viewed offline. Web albums are automatically updated when you add new photos to the albums via the social media or platform they were synced through.

Is the Pix-Star 15-inch photo frame good for elderly users?

Pix-Star’s frames are known for the simplicity and ease of use. They’re especially great for elderly users thanks to features like remote control capability and easy-to-use controls.

Elderly people often don’t enjoy touchscreens and trying to find which options can be chosen, and which are just part of the display. Pix-Star’s 15-inch photo frame has a tactile and simple remote controller that is used to navigate through the menus. The menus are shallow and simple to follow. They are multilayered and won’t leave you having to back out through several screens just to get back to the home screen.

Slideshows are super easy to create, even though they have quite a few customizations. Worst case scenario, you can just remotely take over the frame for them and fix whatever they’re having trouble with. You won’t have to sit on frustrating video calls trying to explain what they can and can’t do on the frame.
This combined with all the offline features and functionality makes Pix-Star’s 15-inch photo frame one of the easiest to use for the elderly. It’s a great gift for grandparents or anybody that isn’t too confident in their technological skills.

Previous articleMaking Sense of the Pricey Digital Art Frame!
Next articleHow to Choose the Best Digital Frame for Your Family
RELATED ARTICLES