A Large Digital Picture Frame Might Be Just What You Need! 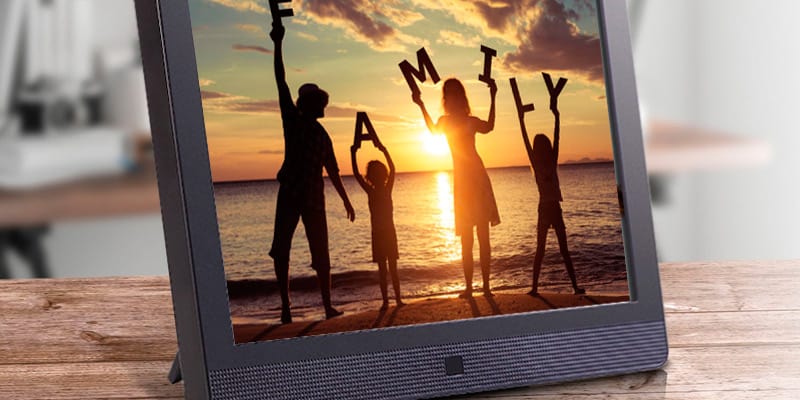 What are the advantages of large digital picture frames?

One of the major differences between a small and large digital picture frame is the brightness. In Pix-Star’s case, the larger frame’s screen is almost 15% brighter than the smaller option. This means you get clearer views, especially in brightly lit rooms, a more immersive viewing experience, and helps the frame fill up empty walls and add more character to your home.

Another advantage of larger screens is the broader viewing angle. Many smaller picture frames have a relatively narrow viewing angle, which limits how far to the side you can still clearly see the image from. Larger screens increase this viewing angle, making them a great choice for a large living room, or to display on a higher-up mantelpiece. It’s also fantastic for huddling around with your loved ones and reminiscing over past memories and special moments together!

What are the disadvantages of large digital picture frames?

Larger digital picture frames are quite a bit heavier too. Generally speaking, the larger frame can be 50% – 150% heavier than the smaller frames, depending on how much bigger they are. Pix-Star’s 15-inch frame is nearly double the weight of the smaller frame, which isn’t out of the ordinary. The benefit of this added weight is that they feel more premium and tend to sit more robustly on flat surfaces.

How large do digital picture frames get?

The average digital picture frame is usually around 8 to 10-inches in diagonal screen size. This is similar to the size of an ordinary tablet and a little smaller than the screen of an ultrabook laptop.

Some digital picture frames can be as small as 3 to 5-inches and often double as hubs with in-built speakers. On the other hand, larger picture frames have 14 to 16-inch screens, with the largest ones available being as large as 20 to 30-inches. At this size, it’s more of a digital art frame, and they don’t look as natural as the standard 10 to 15-inch frames. They’re significantly more expensive and harder to fit into the average family or home. You’ll usually find these types of frames in art gallies and private home galleries or showrooms.

Yes. Generally speaking, the larger the picture frame gets, the higher the price goes. You can expect to pay anywhere from 20-50% more for larger digital picture frames, and this price depends on how much larger you choose. For reference, Pix-Star’s 15” frame’s price is about 25% higher than the smaller 10” frame.

Picture frames with larger screens and higher resolutions will be even more expensive. If the larger picture frame has extra features, brighter panels, or enhanced performance, prepare to pay more on top.

Do large digital picture frames have a higher resolution?

This isn’t always the case. Usually, the larger frame keeps the same resolution but increases the brightness of the panel. This gives the appearance of sharpness and clarity, even though the pixel-density and sharpness won’t be quite as good as the smaller frame.

When the larger screen has a higher resolution, the price goes up significantly. Higher-resolution screens are significantly more expensive to produce, especially in their larger variants. The good news is that the difference in sharpness and clarity is hard to notice. In practice, you aren’t going to notice much of a difference between image and video quality.

What is the best large digital picture frame on the market?

It’s feature-rich and offers some of the best versatility and connectivity on the market. You can sync your photos and videos from Facebook, Instagram, Verizon, and many more. It’s fast, easy to use, and intuitive. You can also use the dedicated mobile app or even email to send photos. This combined with a clean web-interface and the ability to connect to 25 different frames from the same account make it one of the best picks in its price and size range.

Can I use a TV as a large digital picture frame?

Upload all of your pictures and videos to the USB and connect them to your TV. It’s worth noting that unless you have a smart TV, you won’t be able to connect to the cloud or link to your online albums (Facebook, Instagram, etc.).

Using a TV to display what’s on an existing frame is a bit trickier. You need to make sure your digital picture frame supports external displays and has the right ports/software (it’s not very common).

You’re better off using a TV as a standalone display, but you won’t have the same level of connectivity and versatility that a digital picture frame has (emailing photos, syncing with social media photos, etc.).

How many photos can a large digital picture frame hold?

8GB of internal storage is enough for about 30,000 photos (at the frame’s native resolution). This is more than enough to link up several social media accounts, web albums, and loads of photos directly from your phone’s gallery, and more.

What is the best aspect ratio for a large digital picture frame?

Large digital picture frames with either 4:3 or 16:9 aspect ratio are the best. They match the most common aspect ratios of smartphones and point-and-shoot cameras, so you won’t need to worry about your photos not filling the frame’s screen. Read out guide to understand the importance of digital frame aspect ratios!

4:3 aspect ratios are better for displaying photos and syncing up with your social media photos (especially Instagram). You won’t need to worry about black bars around your photos, or needing to zoom/stretch to fit. 16:9 aspect ratios are better for a combination of videos and photos but are less useful in portrait mode. That’s the trade-off you need to make if you’re a big fan of video playback.

Is the Best Digital Photo Frame for Grandparents Still Good?